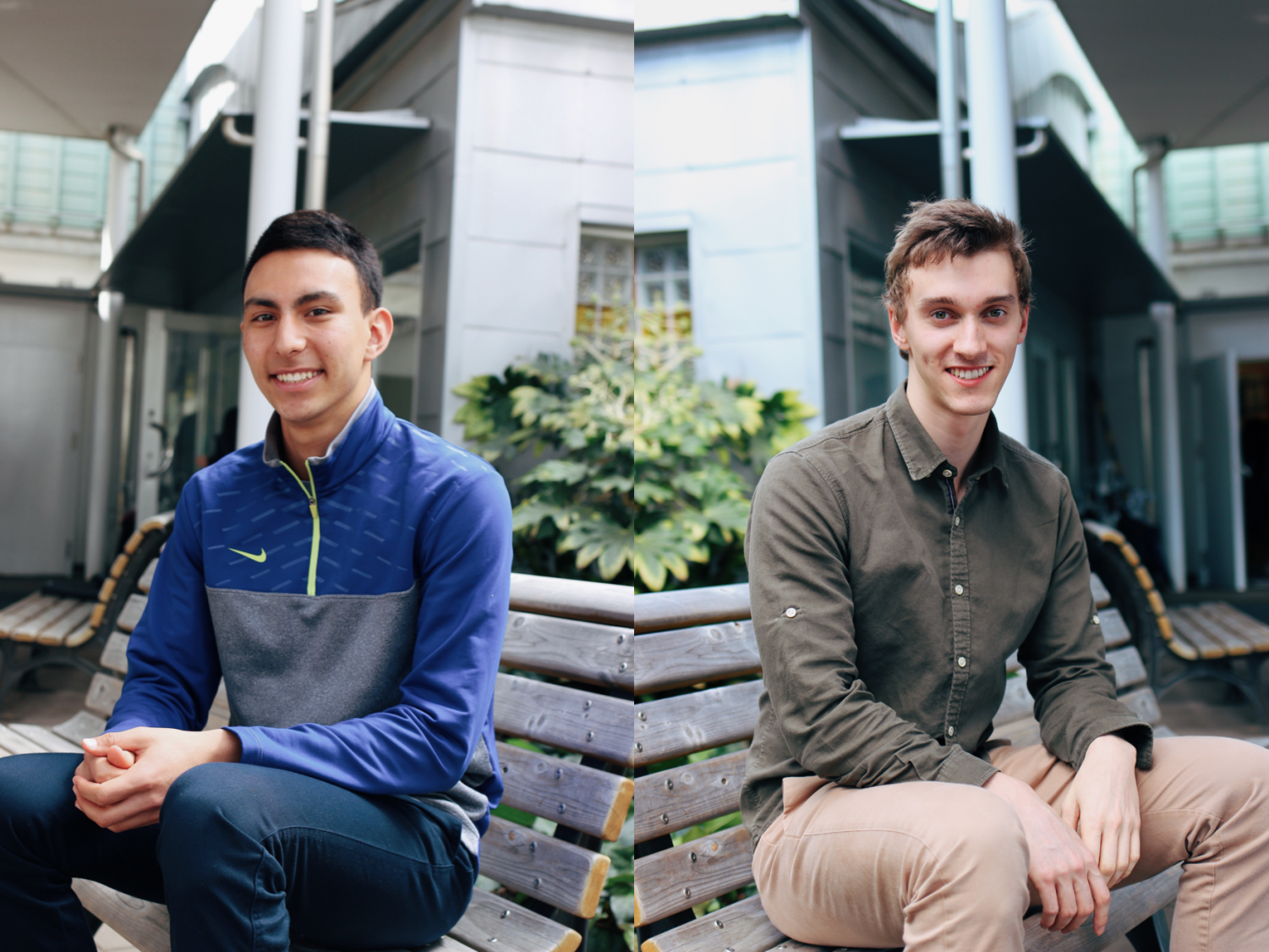 Hanabi is publishing a series of senior profiles leading up to graduation. Here are the profiles of Kenichiro Bernier and Nico van Houten written by each other. 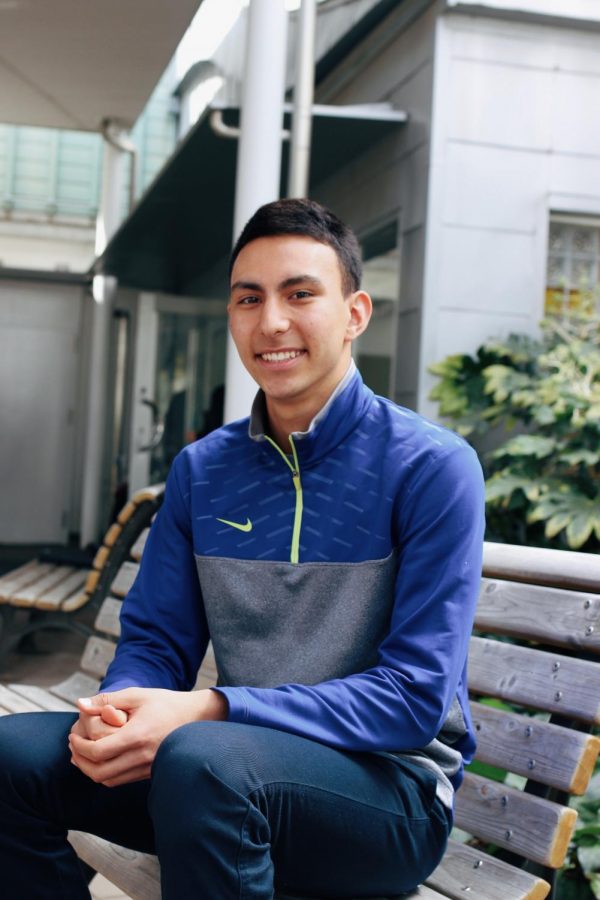 “Without commitment, you cannot have depth in anything,” he asserts. From his clothes to his aspirations, every aspect of Kenichiro Bernier’s life is driven by a deep commitment to what he loves.

He stands tall, confidently representing the Boston Red Sox from head to toe—a common outfit to spot him in. Despite practically bleeding passion and commitment, he is not the type to outwardly attack others who oppose the Red Sox. He is very respectful of everyone’s viewpoints. However, when provoked by a competing baseball team’s fan, he will unleash an overwhelming flood of statistics. Within seconds the instigator is left speechless, mesmerized by how Kenichiro was capable of reciting specific historical data for individual players. Kenichiro fully commits to his claims and always makes sure to refine them down to near perfection.

As reflected through his baseball arguments, Kenichiro is very humble and will never reveal the extent of his knowledge or accomplishments unless prompted. Even after eight years of knowing him, I only just discovered another outstanding accomplishment of his. From seventh through ninth grade he attended a baseball school where he spent 20 hours every weekend on the field. In addition to the demanding practices, he was required to read a novel every month and compose a reflective essay relating the contents of the novel to his life and baseball. During the first day of practice, he was not fully accustomed to Japanese technical baseball terms and ultimately made a communication error. He was jeered off the field by his coach and left to practice alone on the sidelines. All hope came back for a fraction of a minute as he was allowed to re-enter the field just to immediately be banished again due to another error. He was mentally beaten down, physically drained, and had little chance of redeeming himself; however, staying true to his character, he committed more energy and time to the school and achieved the unthinkable by becoming his grade’s captain within a year. Journeys like this have helped mold Kenichiro into a driven leader who deeply commits to what he is doing.

However, this represents only a small part of his character. Kenichiro’s more astounding trait is his capacity to expand from one area of interest to several simultaneous areas while maintaining his level of passion and commitment to each one. “Six AP’s were hard to handle but I ended up doing well. I’m happy I took them because they helped me grow and become a better learner, ” he explains. Kenichiro was one of the few students who took six Advanced Placement courses in his junior year. To most, this schedule would be a daunting nightmare but to Kenichiro it was just another opportunity to expand his horizons and thoroughly explore new areas of interest.

The subject he indulges in the most is the world of tech. Out of moral righteousness and transparency of my potential bias, I must confess that he and I continually bicker over whether Android or Apple is superior. Even though his stance is obviously incorrect and Android is definitely superior, I will concede that only a handful of people in this world share the same passion that he has for Apple. If you walk by him taking a break you will frequently see him playing iTunes music on his Apple AirPods through his iPhone X with his new Apple Watch on his wrist. Yet there is still more: his watch will most likely be gliding across his MacBook Pro trackpad while he surfs MacRumors on his favorite browser, Safari. He loves Apple so much that he tries to rebrand other products he frequently uses, such as his now-improved calculator that is plastered in Apple stickers.

During my interview with him, an unavoidable argument over Android and Apple broke out. When I tried to return to the interview and ask why he believes he won “Best to Bring Home” senior superlative, he happily responded with, “You know why I’m best to bring home? Because I like Apple,” and in some twisted way his response was absolutely correct. He won the superlative because he has the ability to allocate an unparalleled sum of energy and time to the things he loves. He is the most committed person in our grade, truly correct in believing that “without commitment, you cannot have depth in anything.”

Go Anywhere in this World 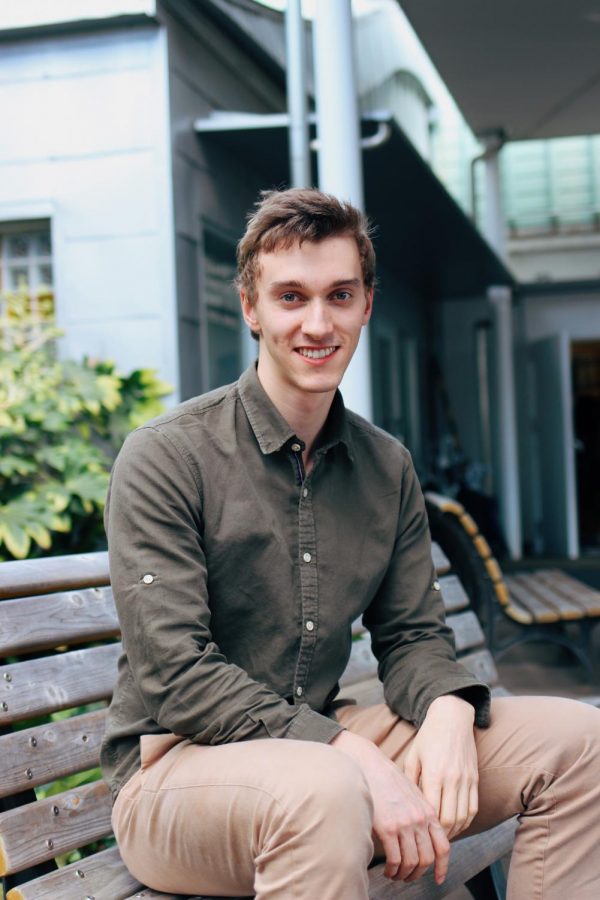 “My nationality…it’s complicated,” Nico van Houten expresses in a serious manner, his subtle European accent adding to the sincerity in his voice. “But for today, I’m German.” A grin covers his skinny face encircled by the fur of his army green down jacket; his playful response replacing the atmosphere imposed by the question with a lighthearted spirit.

Blond hair green eyes, tall and fit, with a well-built upper body, Nico’s physique may indeed embody the model European look. Using this to his advantage, his jokes about his origins often succeed in masking his Dutch and French heritage. Though a simple example, this nationality game of his represents a peculiar quality of himself. Thoughtful and cheerful, serious and entertaining, this is Nico van Houten.

One humid summer night, after a full day of volunteer work mixing cement in a rural Thai village, Nico, untouched by the hours of physical stress, delightedly pulls out his treasured Android phone to take pictures of the clear night sky. Due to our continuous debate over Apple vs. Android, there is an obvious spark of competition in him as he confidently focuses his camera on the tiny white stars, eager to prove his motto: “Android is superior.” Crafting each shot with complicated Photoshop functions and processing systems, he showcases his tech-savviness while aiming for the perfect picture. Snap, snap, snap.

A half an hour or so later, a smile slowly crosses Nico’s face, signaling that his persistence has paid off. Excitement gleams in his eyes like the stars in the pitch black sky as he turns to display his masterpiece—a result of commitment, technological expertise, and jovial competitiveness. Satisfied, he remarks, “Only an Android is capable of taking such a photo.” I can hear the enthusiasm in his voice to this day.

Despite his love for Android, Nico’s interest in technology extends far beyond Google. Whether coding up his own app or diving into the endless mysteries of outer space, his passion for modern innovation is extraordinary. When his phone battery gave into its inevitable decay from age, Nico, rather than getting a store replacement, decided to take matters into his own hands. “For some reason, I was more thrilled than upset,” he reflects. “The sense of challenge it generated inspired me to fix the phone on my own.” Gathering individual gadgets online and assembling them to create a functional battery, failure was not an option for Nico: “It wasn’t easy, but I managed to figure things out. It’s one of those small things that I am proud of.”

Founder of the school’s DECA Business club and voted “most likely to become your boss,” Nico also has a very clear plan for his future. “My choices for my future are all based on my dad’s words: ‘pick something where you could go anywhere in this world,’” he states. “That’s why I want to pursue computer science and finance. These majors open so many doors, especially in the world we live in today.”

Evidently, Nico believes in the importance of creating opportunity. “I haven’t decided on anything specifically, but I definitely believe in the power of having options for a more dynamic future.” His optimistic outlook only promises great success as his life unfolds.

Through all his career-oriented activities and intellectual endeavors, Nico still finds the time to let his humor out. From corny jokes told in the library to deliberately awkward handshakes in the hallways, the iconic grin that forms on his face lightens up his friends daily. Always willing to play frisbee or to buy rye crackers at the kiosk, his presence brings energy and action. When asked about his eagerness, he promptly replies, “Why not?” While Nico greatly values academics, he is always ready to bring some spirit to maximize his high school experience.

With his thoughts filled with circuits and sports, business plans and clever comebacks, Nico truly savors every moment. A collection of ideas and an assortment of abilities, he really can — in alignment with his dad’s words — go anywhere in this world.