The War For Myanmar’s Future 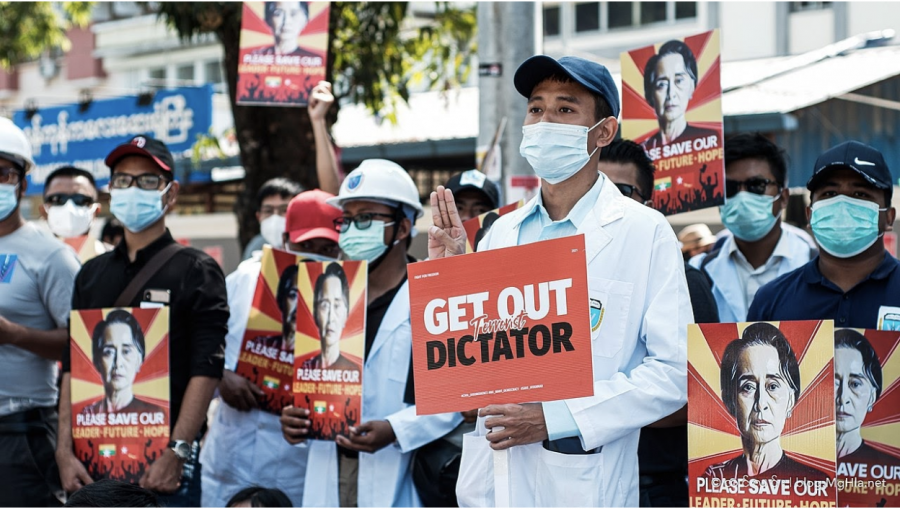 Since February of 2021, over 500 people have been murdered in Myanmar.

Located in Southeast Asia, the once peaceable country is currently suffering from mass protests, violent crackdowns, and government shakedowns. News broadcasts are inundated daily with rising death tolls and increasing instability within the regime, while citizens across the globe watch with horror. The same questions remain for many: What exactly is happening? Why is the violence occurring? Will it end soon?

The primary reason for the chaos and violence is a coup d’etat conducted by the Myanmar military. For decades, the government has suffered from a rocky relationship between democratic and militant parties. The country, known as Burma at the time, initially gained independence from British occupiers in 1948.

Under the guidance of the National Army, Burma would spend more than a decade as a democratic nation, led by U Nu. However, after a string of challenges including corruption, insurgency, economic collapse, and mismanagement, the constitutional government invited General Ne Win to take over through a temporary military rule.

After the 1960 election, U Nu was appointed Prime Minister once again. However, continued flaws within the civilian-led democratic government would lead to Burma’s first coup, organized by General Ne Win. From 1962 to 1974, Ne Win and the Tatmadaw (Burma’s army) would completely dominate the government.

After 1974, the military-led Burma Socialist Programme Party (BSPP) would modify governmental rule slightly, by adopting a Constitutional Dictatorship (and eventually changing the country name to Myanmar in 1989). The “Chairman of the State Peace and Development Council” would continue to crush unrest by utilizing Ne Win’s philosophy: “When the army shoots, it shoots to kill.” Following a period of widespread opposition and inner corruption, the military leadership would finally dissolve in 2011. The 2010 general election ensured that a constitutional government had returned. With a democratic state restored, the people of Burma tasted freedom for the first time in 50 years.

However, history is now repeating itself. After a decade, the Tatmadaw has regained power through General Min Aung Hlaing. Since 1974, General Hlaing has risen rapidly through military ranks, finally promoted to Commander of the Bureau of Special Operation-2 in 2009. Under this position of power, Hlaing has been accused of ethnic cleansing against the Rohingya Muslims in North Myanmar, even receiving two UN sanctions in 2019 and 2020.

On the morning of February 1st, 2021, the Tatmadaw detained State Counsellor Aung San Suu Kyi and multiple high-ranking officials, while General Hlaing immediately declared a state of emergency for one year. Military officers promptly occupied the vacant government, locking the former State Counsellor under house arrest. In the span of less than a day, Myanmar was brought back 60 years into the past — once again under the grip of an authoritarian military.

Now, rampant propaganda is being spread by the Tatmadaw government, blaming the previous civilian government and Kyi, a 1991 Nobel Peace Prize laureate, for election fraud and corruption. Kyi was a fierce advocate for peace and individual freedom. She previously suffered from 15 years of house arrest from 1988 to 2010, after daring to speak against the BSPP decades earlier.

General Hlaing’s blatant denunciations of Kyi’s alleged iniquities are cast into doubt by civilians, who have taken it upon themselves to protest peacefully. Tatmadaw officers have responded with rubber bullets, water guns, and live ammunition, painting the formerly lively streets of Myanmar in blood and bodies. In a few months, General Hlaing’s regime has already begun to unravel Aung San Suu Kyi’s peaceable guidance.

After a mere ten years of civilian rule, Myanmar is once again suffering from blatant corruption and egoism within the military. Under their authoritarian regime, the Tatmadaw have maimed, shot, and killed hundreds of protesters and innocent civilians. However, public resistance and courage have continued to battle Hlaing’s dictatorship.

Although the current situation is unlikely to defuse anytime soon, frequent protests and public displays of opposition have bolstered the resolve of the people even further. A fight for Myanmar’s very future is occurring right now, a fight for peace, recovery, and freedom.