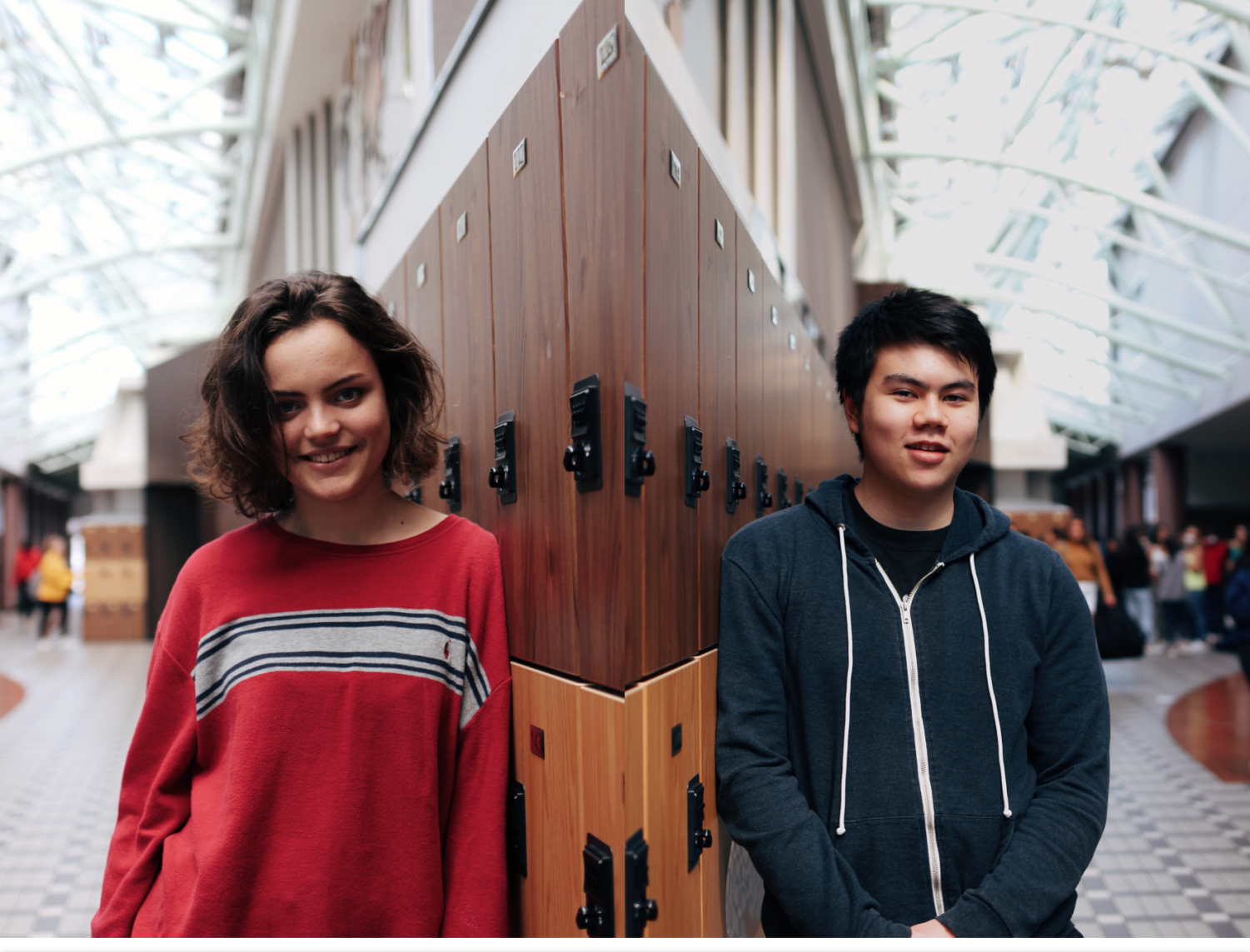 Hanabi is publishing a series of senior profiles leading up to graduation. Here are the profiles of Leah Fahy and Eliot Behr, written by each other.

Although a Tokyoite by birth, she spontaneously concedes, “I can’t really say that I’m from Japan.” In America such non-observance of patriotism could prompt eyebrow-raises, yet her looks intuit understanding: blondish hair and olive eyes—all traits foreign to homogenous Japan. Any chances of hiding amongst the urban masses are stymied by a six-foot stance, causing her to stand out literally. Stuck on a tiny, isolated island, however, it seems that Leah Fahy has made her place.

Leah is the product of a family separated by the Pacific. Her father is from New Zealand, her mother a Puerto Rican American. Growing up abroad (including a brief time in Singapore) has given her a deep, almost instinctively broad perspective. She is, accordingly, open about her future professional plans, tactfully noting that they’re still unclear. Leah remarks that she can see a career in International Relations, saying, “I kind of have the unique chance to see things in different perspectives than others can.” In this manner, Leah’s third-culture life has not just been a poignant talking-point, but rather something with admitted benefits. With a special-occasioned assuredness, she remarks, “Not knowing where you’re from, is kind of being a part of everything.”

Cognizable in Leah is a deep sense of commitment to helping others. Following up on her goals working in International Relations, Leah adds, “I don’t know exactly what I want to do, so I’m not sure,” before briefly pausing as if in a state of reverie. Having found her track, her voice comes floating back. She confidently continues, “Yeah, I don’t know that, but I want to be doing something that is useful in some way.” In comparison to attempts to bubble Leah into the definition of a “third-culture kid,” particularly based on the “annoyance of its buzz-wordiness,” Leah is satisfied to attribute herself a helper, proclaiming, “For sure, I guess I’m a helpful person. I’m kind of a helpful person.”

The fact that Leah is a person open to debate means that the issue of nature-vs-nurture naturally comes up for discussion—soon, too, the topic of family finds its courage to emerge. Her household features routine family dinners, sometimes overly rife with talk. “They’re really loud, they’re so over-the-top, and you know looking for attention all the time,” Leah comments. “No one really listens to each other, but I guess that’s a lot of families.” And just like any ordinary family of six, there’s sure to be conventional, mostly innocent, conflict.

Discussing her siblings, Leah observes, “All of us are really different from each other.” Notable is the fact that among them, Leah is the overachiever. Mentioning this, she remarks, “I’ve always tried harder than my siblings, but I don’t really know why, maybe it’s a need to make people happy.” In part, Leah acknowledges that this has to do with lessening the stress of her parents, who themselves were the “Leahs” of their families growing up.

Leah also notes that she is the “mom” of her groups—both familial and at school. For example, settling arguments with her parents, Leah realizes that she is usually the one to interject. Elaborating further, she states, “My parents would have an argument, and each rant to me about it. And I’d have to be like well, ‘He was probably doing that’, or ‘She was probably feeling like this.’” With a laugh, Leah acknowledges, “We’re pretty tight, you know — when no one’s fighting we all have a great time. It’s mostly just teasing each other.” Even among her friends, Leah elaborates, “I like to be the person who jumps in and tells people how and what they are saying is similar, and how they can combine their opinions.”

One topic pops up a lot in conversation with Leah; as she admits, “It always comes back to Cross Country.” Coming into the team at first, Leah explains, “I was the only freshman on Varsity. On the startline I was literally about to cry.” The experiences of a senior friend uplifting her, and the guidance of Coach Welckle (whom she describes as her “favorite person/dad”), has helped Leah mature into a strong leading captain this year. Leah explains, “Our sophomores are the most talented people I’ve ever met, but still before races they go white and look like they’re gonna puke. I’ve got to give them talks to calm them down.“ Topping off an impressive high school career, Leah was voted this year’s MVP for Cross Country.

There’s no doubt that Leah’s success will continue. And with her broad perspective, there’s also no telling where she might go.

A navy jacket, black pants, blue Nikes. Short brown hair, dark eyes. Half American, half Japanese, though to any student at the American School in Japan just describing him as “half” would suffice. He sits on the carpeted floor, leaning casually into the wall behind him, a comfortable smile playing across his face. This could be anybody at ASIJ; not shy but also not outspoken, friendly and attentive in class, nothing about Eliot Behr makes him immediately stand out. He seems to perfectly fit the mold of a typical ASIJ student. Yet this is not quite the case.

“I used to mess around a lot at my old school,” he admits, his eyes flitting downwards. “I would walk out of class whenever we had a sub who told us we could leave if we weren’t interested. I really didn’t care about school.” In contrast to what a first impression of Eliot would suggest, during middle school he was a troublemaker, attempting to attract attention by acting in a way he then thought was “cool.” It was only when he moved to ASIJ his freshman year that Eliot began trying to adopt a studious, serious persona, one that would make him blend in more with his new peers.

But Eliot isn’t studious, at least not in the conventional way. His friends would describe him as smart, but his interest in learning didn’t come about as a result of his efforts to change his personality. He doesn’t pore over textbooks; he reads Wikipedia articles on anything that sparks his interest (“It’s my hobby I guess.”) He doesn’t think knowing formulas should be a requirement for math, but he learns them nonetheless because he respects the people whose life work was creating them. He does well in his science classes because he’s fascinated with learning about how the world works; his goal isn’t good grades, but his interest makes them come naturally.

“I used to be really afraid of sharks, like just scrolling past a photo of one, I couldn’t even look at it.” As the words exit his mouth his hands reach up instinctually to cover his eyes, as if in an effort to shield himself from the terrible images. “When you’re taking a cold shower and you close your eyes, it feels like you’re in the middle of the ocean and that scares me so much because I feel like a shark is going to come up from behind me.” Even in this seemingly irrational fear, Eliot searches for logic. “I think maybe my ancestors were killed by sharks all the time so they evolved to be afraid of them,” he muses. He is curious and thoughtful, a desire for understanding spurring him to search for the reasons behind every situation.

Though he is considering studying medicine at university, when asked he doesn’t claim that his goal is to become a doctor. Instead, without a moment of hesitation he shares, “Yeah I have a life goal. It’s to have my own Wikipedia page.” It’s not a desire for fame that propels this hope. Rather, he believes it would mean that he has “done something important in life” and “somehow contributed something to humanity.” And perhaps part of him hopes that in the future it will be his work that sparks the imagination of other young Wikipedia aficionados.

An avid guitar player and music lover (he is one of the few people who still listens to full albums), Eliot admires artists who are unafraid of “being provocative and living unapologetically.” Whether it’s the flamboyant Morrissey from the Smiths or the eccentric stage look of Robert Smith from the Cure, he “envies the prospect of naturally having a strong personality and being comfortable with it.” It is true that he may not be outwardly flashy or different. Yet talking with Eliot it becomes clear that, in his own way, he is living just as unapologetically as the musicians he looks up to. Although he may not realize it, in a high school environment of teenagers so fraught with insecurity and the need to conform, his questioning personality and ability to think deeply makes him more unique than any mere appearance could.