Flying on Vapors: Those New Nikes 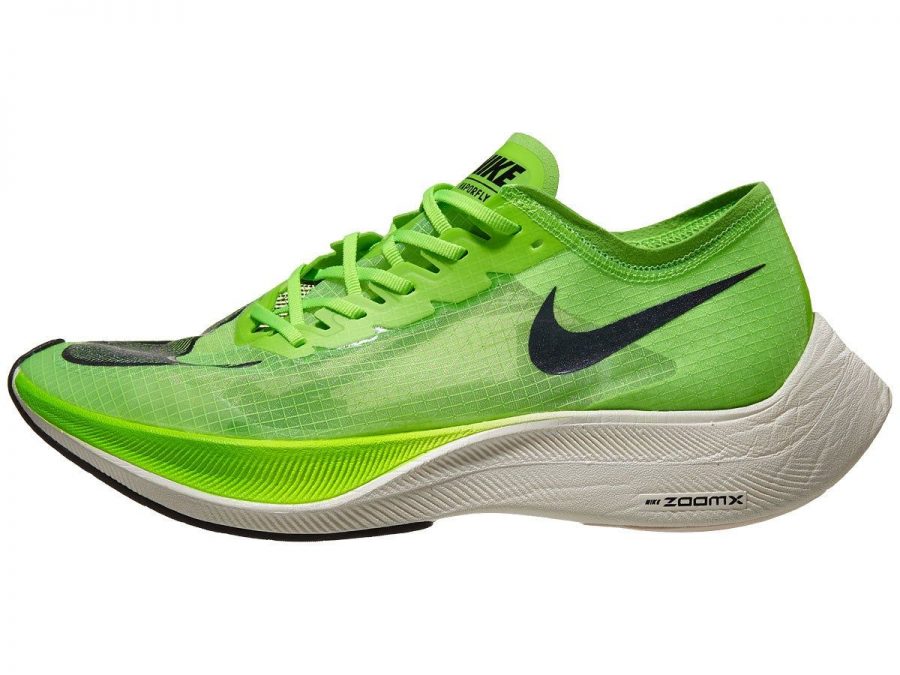 What is one thing that all runners dream of? A shoe that makes them faster. Wouldn’t that be nice? Well, dream no more because one actually exists now.

The Nike Vaporfly Next % burst into the running world as a revolutionary shoe. Said to make runners 4% more energy-efficient (faster), the shoes are something straight out of a fairytale. However, it is not magic that makes the shoes so great. The Vaporfly contains a full-length carbon fiber plate under the foot, which gives the runner extra spring to keep pushing forward.

Additionally, the midsole of the shoe is made of the new Zoom X foam material, which gives an incredibly efficient energy return. Just when you thought the shoe couldn’t get any better, the upper is made of a lightweight and water-resistant material called VaporWeave. No worries about bounding through puddles in these. These components combined create one of the greatest running shoes ever made.

This may be starting to sound like an ad for Nike, but that’s just how great the shoe is. However, that greatness has come with some controversy. “Tech Doping” is what they are calling it: a new form of doping, not relying on performance-enhancing drugs, but instead performance-enhancing technology.

The speed at which these records are falling is just another indication of how great the shoe is. It has also brought up a question of fairness. The ruling track and field committee, IAAF, has been discussing for some time whether or not the shoe should be permitted in official races. It is said to give athletes an unfair advantage over competitors who do not sport the shoe.

The spring-like effect of the carbon fiber plate is said to give athletes a more efficient stride, which also arguably violates an official footwear rule stating that a shoe must not “be constructed so as to give athletes any unfair assistance or advantage.” As many professional runners have shoe companies that sponsor them, athletes are forced to wear the brand they are sponsored by, and that brand only. Therefore, athletes not sponsored by Nike will not be able to compete with the shoe. This situation is similar to the speedo LZR racer, which was a swimsuit with special drag-reducing technology which gave competitors an edge over those less fortunate counterparts. Under the reign of the LZR racer, close to 100 new world records were set in the swimming pool.

As technology and research capabilities continue to advance in our ever-improving society, naturally, many advancements will be made in the sporting world. If runners from 60 years ago were to use any ordinary running shoe from today, they would be amazed at how much of an advantage that gave them. Perhaps the Vaporfly is just the start of another technological breakthrough in running, like the many that have occurred in the past.

Soon, other companies will follow what Nike did, creating their own shoe just as good or even better. In my eyes, the introduction of the Vaporfly to the running world is nothing but good news. Like the space race, each company will continue to try and better itself, revolutionizing technology in the process.

Ultimately, the official ruling of the IAAF was to not ban the shoe. It was found that the shoe does not actually act like a spring, but instead merely altered the way the athlete ran.