Hoops for the Wealthy: How the NBA is Limiting Fan Access 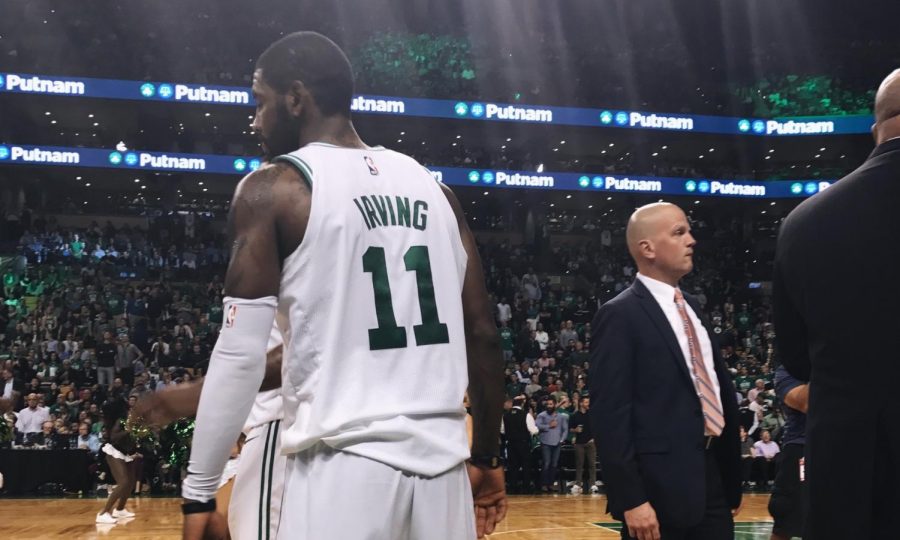 A close-up shot of Kyrie Andrew Irving, a professional basketball player for the Boston Celtics.

In sports, there’s nothing quite like going to an NBA game in person. Watching games on TV, while still very enjoyable, could never top the sheer spectacle of watching Giannis dunk like he’s on an 8-foot hoop or hearing rabid Celtic fans scream obscenities at players while covered in green. Nowadays, if you pay a hefty price you can get close enough to feel the sweat of the players, but most people can’t pay such high prices, pushing many loyal fans to upper decks or out of the arenas altogether.

Throughout my life, I’ve had some of the best seats in the NBA. I’ve been at the TD Garden and Madison Square Garden. I’ve felt the hardwood vibrate with each dribble of the basketball and I’ve seen some the best basketball players in the world compete just feet away from me. The size, athleticism, and skill of these players are unforgettable, something one can’t fully comprehend on TV.

Unfortunately, the dream experience for many NBA fans carries a large cost. A ticket in the lower bowl of an arena regularly costs at least a hundred dollars and with a courtside seat that number bumps up into the thousands. While I was lucky enough to get these seats for free because of my dad’s job, most people simply cannot pay such enormous fees.

While I was in the Bay Area over winter break I wanted to go to a Warriors game. I’d been a fan my entire life and I hadn’t been to Oracle Arena in years. But because of how popular the historically moribund Warriors have become, seating that had been available ten years ago was extremely limited, resulting in still-expensive seats all the way to the top row in the upper decks.

I didn’t mind, but for many lifelong Warrior fans this is a huge problem. Oakland native and Trail Blazers star point guard Damian Lillard said before the game, “A lot of the real Warriors fans, a lot of times they can’t go to the games. They can’t afford it.” As ticket prices continue to increase every year with the NBA’s increasing popularity, this problem will only get worse throughout the league, further pushing away fans from the court and lower bowl, denying them the opportunity to see NBA basketball up close.