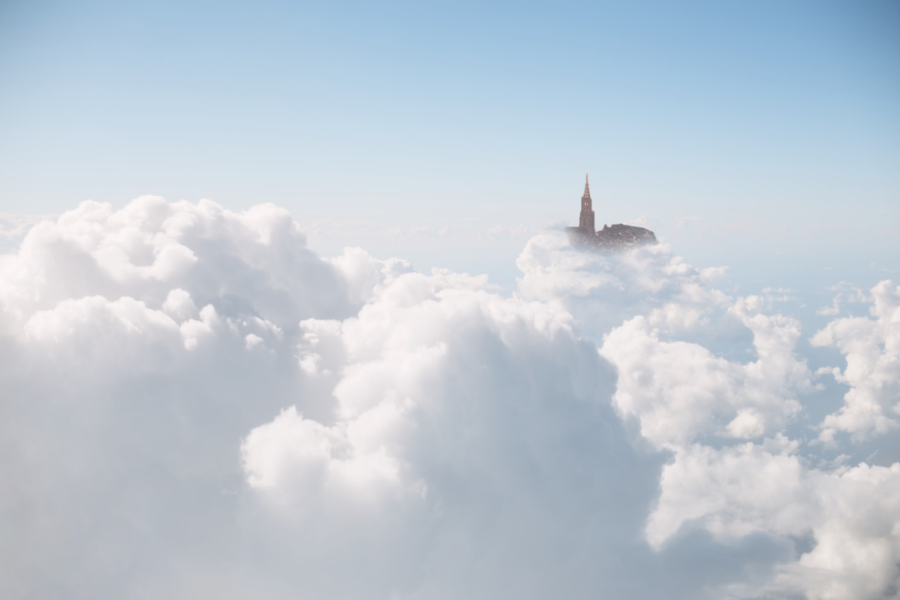 Anthony Doerr is like a tapestry weaver when it comes to his novels. His characters start on opposite sides of the loom, then Doerr threads them closer together against beautifully constructed backdrops until the elegant image is revealed.

In his Pulitzer Prize winning 2014 novel All the Light We Cannot See, Doerr deftly intertwined the stories of a blind French girl and a German radio technician as they crossed paths in World War II. With his most recent novel Cloud Cuckoo Land, he weaves in five characters across four different time periods.

Anna lives in a seamstress’ house in 15th century Constantinople. She doesn’t have much of a talent for sewing, but she does have an affinity for books. Omeir is on the other side of the walls of Constantinople; born with a cleft lip and shunned from his village, he is recruited into the Ottoman army to help topple the Byzantine capital.

Zeno and his single father move to the mill town of Lakeport, Idaho in the 1940s where he has to quickly learn how to grow up on his own. Seymour, a modern day resident of Lakeport, struggles with frequent episodes of sensory overload and finds solace in the woods behind his house. When a development company crushes the forest to make room for new housing, Seymour vows to get his revenge.

Konstance lives more than a century in the future and is aboard the Argos, a space-faring vessel bound for the Earth-like planet BetaOph2. She has never been to Earth, but that doesn’t stop her fascination with it.

Even more than Marie-Laure and Werner in All the Light We Cannot See, Anna, Omeir, Zeno, Seymour, and Konstance seem impossibly far apart. How can you connect people from ancient history, the present day, and the far future? Doerr’s answer: the power of books. The characters of Cloud Cuckoo Land all encounter and pass on an ancient Greek story about a fool who is desperately searching for a city in the sky.

Each of the five are interesting in their own right. All are outsiders, but fiercely independent with a strong will to survive. Doerr knows how to inhabit each unique location, time period, and situation in a way that feels remarkably real. And although their storylines remain separate for much of the novel, Doerr lets them creep closer in a way that is suspenseful. When their stories are finally knotted together, the conclusion is satisfying yet unexpected, and much deeper than the tangential connection that the characters share in the beginning.

Cloud Cuckoo Land is set up for success in the same way All the Light We Cannot See was: interesting characters with a cleverly entwined plot. However, the narrative is hindered by its inability to attach us to any one character.

The novel spans six-hundred-twenty-two pages, but it is barely enough time to complete the multitudinous arcs. Not that Cloud Cuckoo Land lacks character development; what it lacks is time. There is not enough time to sit with the characters. Not enough time to really get to know them. Because there are so many moving pieces, each piece is always on the move. The novel jumps from character to character in order to make sure each is on pace to finish its part in the larger story. Anytime it seems that it might settle on one of the characters, the novel has to move on so we don’t forget the other four.

The unfortunate effect of all this shifting around is that it’s harder to feel compassion for Anna or Omeir or Zeno or Seymour or Konstance. When it’s harder to be compassionate towards the characters, every part of the story is reduced. Most notably, Doerr’s signature interconnectedness doesn’t feel as magical as it has.

While Cloud Cuckoo Land may not reach the heights of Doerr’s previous novel, it is still worth the read. Doerr is a phenomenal writer with captivating prose. The fact that he is able to pull off a narrative with five main characters spanning multiple centuries as well as he does is a testament to his abilities as a storyteller.